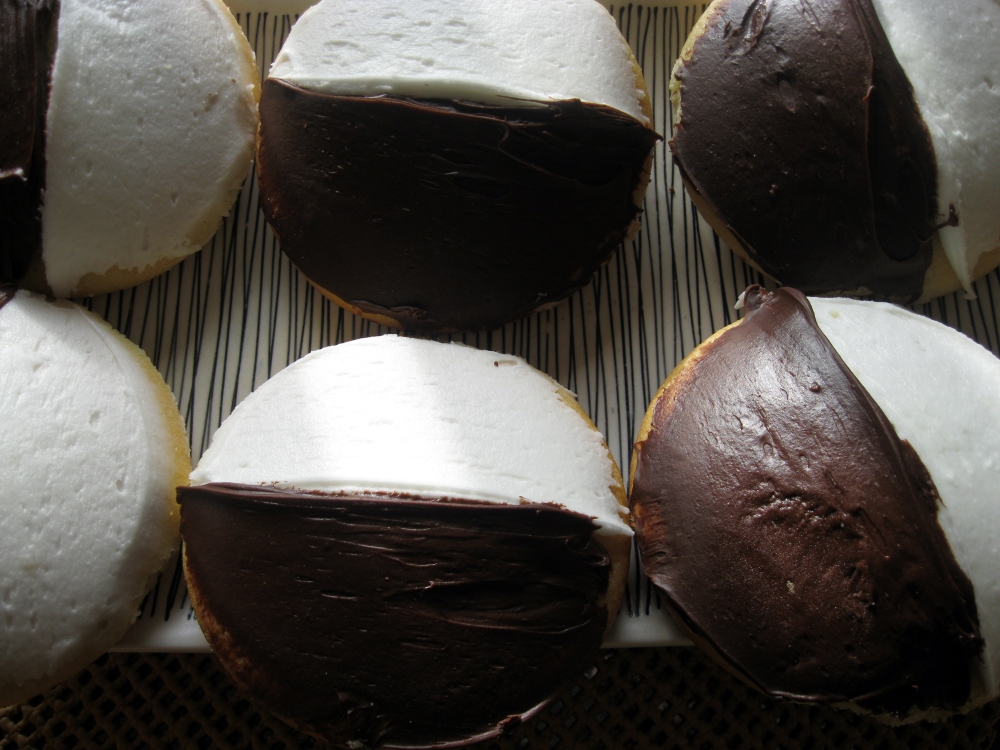 Black & White Cookies aka Half moon cookies, half and half cookies and in Germany Amerikaners have always been an elusive, personal favorite of mine. Why elusive? Mostly because they are so difficult to find! However, when I do unearth them, I snatch up a dozen of the soft, hand-sized, yin and yang frosted shortbreads, savor them and share with only the most worthy.

Black and white cookies are thick, soft, sponge-cake-like shortbread cookies dressed in one half vanilla frosting, and on the other half chocolate. Their origin is unclear, but most believed they were originally called Half-moons and first appeared in Utica, New York at Hemstrought’s Bakery in the early 20th century.

Today “half-moons” are only common in Upstate New York and New England bakeries. New York’s Black & Whites are enormous—bakers are barely able to fit them in bags for their customers to transport them. While the buttery, light, vanilla yet lemony flavor remains the same, New England’s Black & Whites are much smaller and one doesn’t need a crane to carry them home.

In Germany there is also a black and white cookie that’s called “Amerikaner,” which was said to be introduced to Germany from American soldiers after World War II around late 1940s to 1950s.

In the 90’s I remember watching a Seinfeld episode “The Dinner Party” where Jerry eats a black-and-white cookie and compares the cookie to a metaphor for racial harmony and that people should “Look to the cookie!” Remember that? Also, on October 19, 2008, Barack Obama dubbed them “Unity Cookies” at a deli in Ft. Lauderdale, Florida. They’ve made quite a name for themselves.

Today, I am adding to their accolades by dedicating a cupcake in their honor– the flavor similar yet sideways– Nonetheless, sweetly Zen and perfectly Black and White.

PS…the cookie recipe will be posted ASAP. After all, it IS cupcake week 🙂

This all looks familiar right?? Well at least the cuppie recipe. It’s cupcake week here at Once Upon a Spice so the need to be redundant is actually needed! So, here again is “how to make boxed cake taste like made from scratch.”

As you’ve heard 😉  I’m a purist and somewhat of a snob when it comes to baking, but for the sake of busy schedules and time crunches I did some research and found this technique to be quite valuable, light, airy and tasty!

Keeping in the theme of “store bought” mixes, I also found a delicious canned frosting that I was quite fond of as well. So, going against the grain, here are my “Black & White” Cuppies transformed for the busy in-home Chef.

1: Read the directions on the cake mix.

3: Use melted butter instead of oil and double the amount.

4: Instead of water, use whole milk.

5: Add a small box of instant pudding—coincide the flavor with the cake flavor. Or add French vanilla pudding to yellow cake, chocolate pudding to chocolate cakes…you get the picture.

6: Mix well and bake for the time recommended on the box.

Duff Goldman’s is my preference, but a good quality canned frosting of your choice can be used just as long as one is chocolate and the other vanilla.

Note: This recipe will make 48 cupcakes so I freeze 24 and frost the other half.