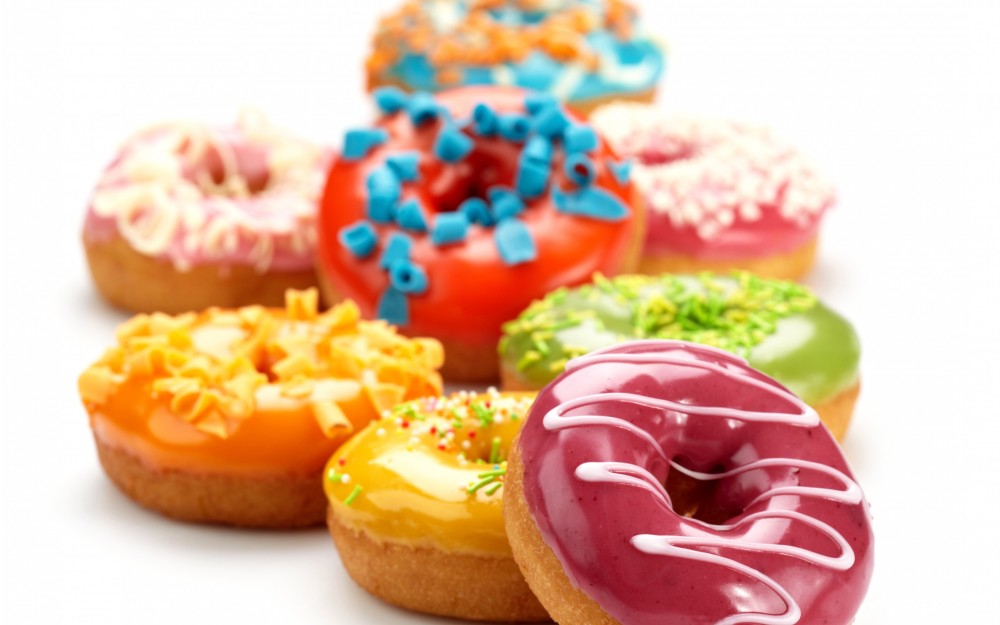 Dunkin here and Krispy there, “donuts” have twisted and turned their way into the hearts of many only to find themselves prime examples of “everyday” indulgences– thanks to a melting pot of influential artistic inhabitants, historical coincidences and of course, sweet tooths. Not to mention, copious pots of bubbling oil. Did you know the Nation has a day set aside for them? Yes! America celebrates “National Donut Day” at the beginning of June! Sorry I missed the deadline for recipe submissions, but today I am offering a few tidbits of their past for your perusal with the promise of future recipes dancing in my head 🙂

Fun Fact: The first National Donut Day was established in Chicago in 1938 to raise money for people in need during the Great Depression. The holiday has since been celebrated on the first Friday in June as a way to commemorate the service of The Salvation Army’s Doughnut Lassies and honor the memory of our soldiers

Dutch settlers introduced doughnuts to the U.S. when they landed in Manhattan, then known as New Amsterdam. They called these doughnut predecessors “olykoeks,” or oily cakes, which were fried in pork fat. Formed by dropping dough off the end of a spoon, their name evolved to “oliebollen,” or oily balls, thanks to their irregular round shape.

Olykoeks began slowly evolving, and Americans started calling these confectionery indulgences “doughnuts.” At the start of the 19th century, doughnuts, as we know them today, with holes in the center, were being consumed across the nation as an inherently American treat.

A 16 year old American sailor named Hanson Gregory claimed to have invented the ring-shaped doughnut in 1847 while aboard a lime-trading ship. Gregory said he disliked that the center of doughnuts often didn’t cook as much as the rest. So he punched a hole in the center of the dough before frying so they could be evenly cooked; Later teaching the technique to his mother. After reading many stories about the void in the center of a doughnut, I’d like to believe this, because it’s a lot more gratifying to know the answer than to say “no one knows who decided to put a hole in a doughnut first, but they were a genius.” Was this a mere fabrication on Gregory’s part? Who really knows!?! It’s still genius!

Onward into Military making history. Nearing the end of World War I in 1917, The Salvation Army established an operation to provide needs of U.S. soldiers fighting in France. Approximately 250 Salvation Army volunteers traveled overseas to set up service “huts” located in abandoned buildings near the front lines where they could serve baked goods and other supplies to soldiers in battle.

When providing freshly baked goods proved to be a difficult feat considering the hut’s conditions, two entrepreneurs cleverly thought to fry donuts in soldiers’ helmets, despite their limited ingredients and facilities. The volunteers were capable of frying seven donuts per batch. Want to try their sweet recipe for yourself?

These sweet treats, along with the warm hearts and shimmering smiles of the “Doughnut Lassies and Donut Girls” who served them, brought a bit of comfort to American soldiers who were serving their country and likely missing the care of their special ladies back home.

Nicknamed “Doughnut Lassies” and “Doughnut Girls”, these women made history by introducing this otherwise unknown confection to the United States when the “Doughboys” returned from war.

Yes, donuts possess somewhat of an unclear and diverse past, but our much-loved deep-fried circles of dough have come a long way since they originally arrived in America. With a sprinkling of sugar and a dusting of cinnamon, they continue to interweave and transform their way into our hearts and have glazed  their way into one of the most iconic pastries in America.