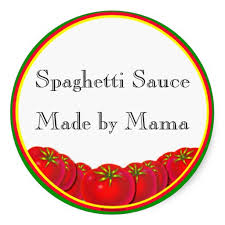 Once upon a time every school child both in Italy and the United States learned that Marco Polo brought noodles back with him from China and that’s how the Italians got spaghetti. As we have explored in a previous blog, this almost certainly wrong. Oh, he might have brought them back but pasta very much along the lines of today’s pasta was being made and used in Sicily before Marco Polo was born. Besides, Chinese noodles are made very differently.

There are a number of stories about the origins of tomato sauce or marinara–invented by sailors, made by sailors’ wives when they returned home, etc. but I suspect these myths are largely far-fetched.

Since tomatoes are a product of the New World clearly they can’t have arrived in Italy (or Sicily) prior to the 15th century. The earliest recipe for tomato sauce that I’ve been able to find referenced is in Antonio Latini’s 1692 cookbook, Lo scalco alla moderna. The earliest recipe for tomato sauce with pasta was apparently in Roman chef Francesco Leonardi’s 1790 cookbook, L’Apicio moderno.

I haven’t been able to uncover the details of these early tomato sauce recipes. They don’t seem to be online either in the original or in translation. All of the early recipes I’ve been able to discover closely resemble Escoffier’s sauce tomate: a sauce employing a roux and containing salt pork and tomato puree and seasoned with bay leaf and thyme. This sounds more like the sauce called “tomato gravy” by Italian Americans than like marinara.

None of this really reveals where the idea for marinara actually came from. I’ve found a number of medieval recipes that closely resemble Escoffier’s sauce tomato, made with figs, prunes, or apricots instead of tomatoes. Could these be the antecedent of marinara?

I have read accounts that claimed that, prior to the invention of marinara sauce, Italians ate their pasta dry, without sauce. I’m skeptical. I think that aglio e olio (pasta prepared with a sauce of olive oil and garlic) goes back as far as pasta itself. We know that the ancient Greeks were dipping their bread in olive oil more than two millenia ago. Why would eating pasta with olive oil from a trencher be so far-fetched? Among the oldest recipes in the Western world is a Roman recipe for pesto—herbs pounded in a mortar with garlic and olive oil—which they apparently used to flavor their porridge. I’m betting that pasta al pesto is pretty old, too.

We don’t know when Italian-style pasta was invented or by whom. Sometime before 1100 and with Arab influence is a good summation.

We don’t know when marinara was invented or by whom. Certainly no earlier than the 16th century. Southern Italy in the 17th century is a good presumption, but it might be as late as the 18th century.

We don’t know what inspired the inventor of marinara. It’s possible that he or she was adapting a sauce that used some other kind of fruit. Or simply had a lot of tomatoes sitting around.

Spaghetti and meatballs is Italian American and almost undoubtedly 20th century in origin.

So, for all we are aware, this thick liquefied red wonder may well have dated back to times of mystery and of the gods. What I do know for certain is the origin of my red sauces date back to childhood with northern Italian and Sicilian influences; varying in taste, texture and uses. Grazie Mille, Mama Carmela and Nonna Lena for the memories and  contributions.